Breakfast at Michael’s in Taos—eggs over easy with corn tortillas and avocado and salsa; is there anything better? At a table next to ours sat two men just finishing breakfast. One florid-faced and husky, wearing overalls; the other slim, quiet, blue eyes. Weathered faces—they could have been 48 or 53 or 62.  As we chatted we realized it was their loaded-up Harley Davidsons parked just outside the café windows. They, too, were on a roadtrip. The day before they’d ridden 680 miles from Kansas City to Taos, setting up camp just as to started to rain, and that day were planning to reach Flagstaff, ultimately heading  to Washington State. Such sojourns, which have taken them everywhere in North America,  are once-a-year events, done because they are friends.

The four of us all grinned at one another; around us hovering the beauty of friendship. After one brief acknowledgment of its presence in our lives and in that particular day, we didn’t speak of it aloud (I chose not to exclaim, as I could have, O Joy Divine of Friends!). But it glittered and gleamed between us, this precious bond that unites Bob & Ned and Maggie & Sands.

Maggie, Ned, and Bob, outside Michael’s Cafe in Taos

We headed outside, took some pictures next to their bikes, and shared hugs all around, before bidding each other a heartfelt and curiously difficult goodbye.

Bob, Sands, Ned: It  glittered and gleamed between us, this precious bond that unites Bob & Ned and Maggie & Sands.

Maggie and I walked a labyrinth next to a Protestant church designed to look like a Mission,

Then headed back to the Taos Inn to check out and fetch our instruments.

Route 64 West may be one of the most beautiful stretches I’ve ever traveled. Heading out from Taos, it bears straight across a vast plain that’s surrounded by mountains, including a bridge over the Rio Grande.

Slicing deep into the Taos plains, it’s a gorgeous cleft in the earth that must have flummoxed early travelers.

As the road began to undulate upward, we came upon EarthshipsThe fantastical natures of these buildings is hard to describe—and even hard to photograph.

They are built as much as possible from garbage: a major building material is used tires—you can see them there to the right of the building. Tin cans and glass bottles placed honey-comb fashion in cement create walls. Broken bottles and pieces of glass provide both glitter and light. The houses—and there are dozens, designed by architect/visionary Michael Reynolds—stretch across this part of the Taos plain. Half-buried in the ground, their huge front windows, which all face South, 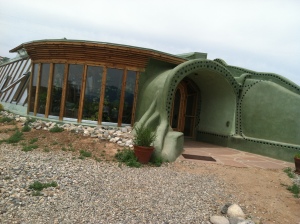 allow tomatoes, chard, and even a banana plant to flourish. Grey water waters those plants. Black water is used on hardy/decorative outdoor plants. Our young guide told us to watch Garbage Warrior, available on YouTube and Netflix.

We continued on through Cruces National Forest, where the road took us through the expected trees but also gorgeous, unoccupied pastoral stretches of grass and water.  We did pass one pretty weird gateway—we actually turned around and went back to confirm that we’d actually seen what we thought we’d seen.

Through Rogue’s rolled-down windows we studied the hanged effigy and the lettered signs, before deciding they must be some kind of peculiar joke.

The road climbed and climbed, almost without our knowing it—a little pop of ears now and again letting us know we must be at 5, then 6, then 7000 feet. Suddenly the vista opened and as if we were standing at the top of a horn of cornucopia, we could see deep into Colorado: what spilled out of the vast horn was a landscape full of descending planes and colors, rocks and trees—while far on the horizon loomed a another range of mountains, the San Juans.

We crossed from New Mexico into Colorado; the map told us we were leaping back over the Continental Divide, but if there was a sign commemorating that fact, we didn’t see it.  We paused for tea in Pagosa Springs, and pushed on to Durango.

We arrived as Venus was beginning to transit the sun, and were handed a welder’s mask to take a look at the tiny fleck of black floating across the glowing orb.  Our host, Dana Ivers, was my brother’s first girlfriend, and is like a sister. She is just 5’ but in that tiny body is a huge spirit.  She has sent a lovely invitation around to dozens of friends and there is some serious talk about moving the concert into the street if her backyard won’t hold them all. Dana made us a fine dinner

and we ate outside and shared stories about our beloved brother and friend, Tad/Oakley.

Dana prepared a sleeping space for me in her marvelous camper, and Maggie shared a bed with Black and Sochi.

Maggie, Dog-Whisperer, attempts to get space on the bed, and while Sochi will do anything for her, Black is reluctant to budge.

Yesterday Maggie and I indulged in the local hot springs and a much-needed massage.  Back at Dana’s house we practiced a bit,

which turned into a concert on her front porch, with her friend John and her visiting son Roddy sitting on steps, and various neighbors stopping by to listen a bit and then move on. These included another John, with daughters Elly and Ila who wore bicycle helmets the size of teacups;

and a stoned-looking young man named Ryan who took a long time to get out a single sentence. He’d been called by the sound of acoustic music floating up the street and was charmingly struck dumb by words and lyrics.

“Do you have a trashy love song?” he managed to utter at last.

I was working through some chord changes, and stilled my fingers on the guitar. “Trashy?”

He tilted sightly, and moved a foot to catch himself from going over. “Yeah… it, like… trashes… you know.”

Maggie laughed. “Songs of loss and death and sorrow.  Tons of ‘em.”

“The Dirge,” Maggie said. “One of Sands’s songs. Otherwise known as ‘The Stars Fell Down’.”

“It’s pretty much one chord,” I told Ryan.

I was excited. “Really? That’s a definition of a trashy song?”

Dana was perched on one step, her friend John on another; Maggie and I on chairs on the porch. For some reason we all knew what he meant.

“OK, I said, dropping the top E string to D, which makes the six strings pretty much one huge open chord. I strummed the diminished D that starts the song. “’The Stars Fell Down’.”

I met you on the new moon

We watched the stars fall down

We kissed and then we harbored

And then you went back home

Those were moments of perfection

There was this yearning to abide

Here Ryan’s whole face contracted, as if he couldn’t fathom this idea—or maybe it was simply that he didn’t understand the lyric.

But the moon it wasn’t full

Or whatever it needed to be

You said, It wasn’t the time.

The song really is pretty much one long celebration of D: for the instrumental break I strum 14 measures of it before briefly going to an A and returning to D.  Maggie took a beautiful, eastern-influenced melancholy and heart-wrenching break. The evening was closing in, darkness finally dropping. Dana’s eyes gleamed. John had his head flung back, resting it against a bit of house siding. Ryan had his feet spread wide, as if he were on a train heading around a long long curve.

And now the moon is at its fullness

It’s a lamp blaring at me from

As if I’d lost you

When I never had you at all

But those were moments of perfection

There was this yearning to abide

But the moon it wasn’t right

And it never is going to be

It just wasn’t the time

And it never is going to be

It just wasn’t the time

We sat now in the gloaming. “Beautiful,” Dana said.

After bidding Ryan goodnight we walked a few blocks into downtown Durango to get some a dinner, which we found at the new and very attractive restaurant El Chimayo. 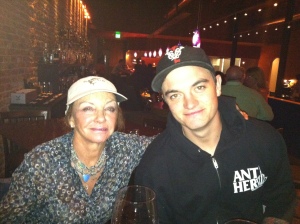 Here’s a version of “The Stars Fell Down” with the astoundingly talented Randy McKean  on alto sax. This was recorded a year ago at Flying Whale Recording. That’s Maggie providing those deep breaths on the accordion.

Writer, musician, teacher, theater artist. Books include the novel CATCHING HEAVEN, a book of essays and exercises, TOOLS OF THE WRITERS CRAFT, and, forthcoming, FLUNK.START: Reclaiming my Decade Lost in Scientology. A CD of my songs is called RUSTLER'S MOON.
View all posts by Sands →
This entry was posted in The Great Water Dragons Southwest Tour. Bookmark the permalink.