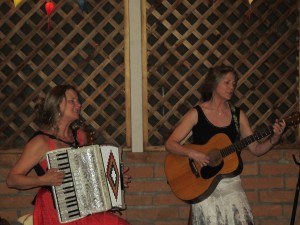 The short version: it went splendidly. 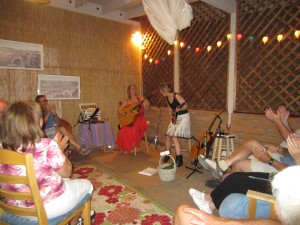 Tracy packed her house with wonderful friends, all of whom it was a pleasure to meet. We played two sets and had a fabulous time.

My song “Rustler’s Moon,” contains the lyric, “he gallops ‘cross the river down near Smithy’s Ford…” which appeared to inspire one of Tracy’s friend, David Courtland. On our break, he invited us to come to the border—Nogales—15 miles away.  But not just to the border, to The Fence—the actual wall that divides the US from Mexico. He offered to take us a tour.

Tracy with a dozen tablecloths headed for the washing machine

Early next morning (no time, in other words, for writing blog posts), after a bit of clean up: we head out.

As we come into Nogales there is no way to miss The Fence, a high brown wall that blasts through the city.  Tracy tells us that as the fence was going up, the government issued gallons of brightly colored paint to perk up the casitas on the Mexican side. We pick up David up in his lovely house and with him sitting shotgun, head towards the border. But not the checkpoint. He takes us about 15 miles East, where we swerve onto a dirt road that heads South. I drive slowly, worried about pings and dents in the rental car, but that allows me to take in the view, which runs deep into Mexico.

Looking at The Fence

Up a hill we pause for a first long distance view of the fence, which undulates in and out of sight like the longest of dragon’s tails.

David directs us ever closer, until we’re right next to it.  20 feet tall, its four-inch bars about three-inches apart; I can barely press a kneecap through. 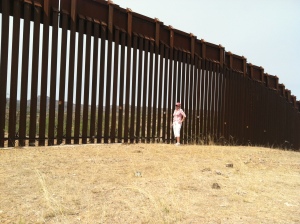 Tracy next to the Fence

Visible through the bars—David points it out—are the remains of the old fence. One ponders the utility of fences.

The previous night we’d heard from a number of people how fun it used to be, heading over the border for lunch, or for a few drinks, waving at the border patrol in passing. Now, in a car, it takes an hour to get over and hours to get back.

The Fence runs for six miles on this, East, side of Tucson, and about the same the other direction; until, we gather, mountains form their own kind of fence.

A border patrol jeep heads towards us, in and out of sight as it negotiates the landscape. The driver is not at all stern; answers all our questions.

He tells us that just the day before they’d recovered 300 pounds of marijuana, thrown over the fence. Maggie says, in disgust,  “If they just legalized the stuff…” The smile that lights his face, quickly extinguished, lets us know he agrees.

Maggie asks if we can take his picture: 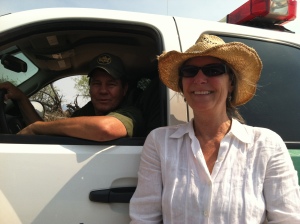 Maggie and the Border Patrol

We drive all the way to the “end” of the fence, which is utterly surprising and anti-climactic: it simply stops:

End of The Fence

Maggie climbs under a bit of rusted barbed wire, all that is left of the old fence, and there we are, Hands across the Border:

Hands Across the Border

David calls himself a Border Evangelist: He doesn’t have a particular agenda, but he wants people to know what it IS, what it actually does, and what it doesn’t. It’s all eye- and heart-opening. We muse on the fact that the real fence is the current economy—many Mexicans are heading back over the border because there is simply no work here.  As we head back—intending to drive The Fence all the way to Nogales—our border patrol friend stops us again and says that construction will make the going difficult; he leads us out the dry wash that in monsoon season turns into the roiling Santa Cruz River.

David offers his perspective: “To me, a river’s something that sometimes has water in it.”

After dropping David off, with effusive thanks, we head to Tubac for lunch and a bit of shopping. I get a better sun hat and Maggie a beautiful turquoise skirt.

I want to be sure we see where Tracy teaches before we leave, and she obliges, heading to Mountain View Elementary and walking us through both campus and classroom.

She clearly loves her work and her students clearly adore her. Among other things, on the break between math and Reading, she sends them out to do Sun Salutations.

It’s very hard to say goodbye but Maggie and I pack up the car and head up Highway 19, to the next step of the Water Dragon Adventure Tours: Tucson.

Writer, musician, teacher, theater artist. Books include the novel CATCHING HEAVEN, a book of essays and exercises, TOOLS OF THE WRITERS CRAFT, and, forthcoming, FLUNK.START: Reclaiming my Decade Lost in Scientology. A CD of my songs is called RUSTLER'S MOON.
View all posts by Sands →
This entry was posted in The Great Water Dragons Southwest Tour. Bookmark the permalink.

10 Responses to The Fence